We had an uneventful flight and drive into Reykjavik, arriving at our first night’s lodging around 1 a.m. The drive into the city takes about fifty minutes from the Keflavik airport. There is a convenient and moderately priced FlyBus that shuttles arrivals to (and from) their hotels as well as rental cars, and private drivers if you are with an organized tour. Eric the Red’s is my usual guesthouse in Reykjavik, and the hosts had let me know how to get into our room after midnight.

We were quick to bed and rose in time for the usual buffet breakfast that seats twelve at one large table in the dining room. It is a great way to meet travelers from around the world, most of whom are fluent in English and eager to talk about their travels or plans in Iceland.

Eric’s is conveniently located across the street from Hallgrimskirkja, a hilltop landmark church visible from most of Reykjavik, making finding the way “home” very easy. The day was partly cloudy and pleasantly cool (50s F) when Susan and I walked downtown after breakfast to shop for lunch foods and stretch our legs. The grocery did not open as early as other shops, so I had a chance to browse a bookstore while waiting for BONUS to open. Several of my favorite Icelandic authors have new books available in translation. Which ones will be readily available in Northwest bookstores and libraries, and which should I buy here?

It being Susan’s first visit to Reykjavik, I pointed out some favorite eateries and landmarks. BONUS finally opened at 11 a.m. and we had our first language challenge of the trip. Grocery stores in Iceland don’t bother with English labels, so visitors need to recognize what they are looking for. We stocked up on bread, cheese, peanut butter, fruit and yogurt. I also introduced Susan to skyr, a thick delicious non-fat dairy product that Icelanders have made since long before Greek yogurt appeared on the market. 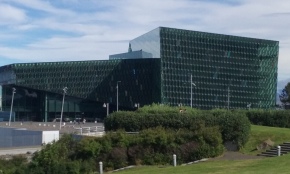 On our return trip we stopped to admire the Harpa Concert Hall, located right on the Reykjavik waterfront. It is quite interesting architecturally and has great acoustics, too. We went inside about a week later, so watch for more about Harpa on another day.

After a picnic lunch in Eric’s back yard, we visited the Einar Jónsson sculpture garden  at the end of the block. Einar worked in the first half of the 20th century, producing dramatic statues of mythical, religious and historic figures. It is one of several free sculpture gardens in the city, but probably the most centrally located.

Bragi picked us up promptly at 1 p.m. and we headed for Iceland’s south coast on Highway 1, the country’s ring road. Our first stop was Hveragerði, Iceland’s leading greenhouse town. The area’s landscape is geothermally active, supporting both greenhouses and large geothermal power plants.

My particular interest was the geothermal pools, or hot pots that

appeared after a series of earthquakes in the spring of 2008. I had hiked through the area in 2007, and had been amazed to return the next summer and find boiling mud pots a quarter mile uphill from the busy town. I was curious to see if they were still as active now, and what kind of visitor information had been added to the site.

I have to say that we probably would not have been aware of the geothermal pools if we had been casual visitors there. An agricultural university has grown up along the access road to the site, and there are no directional signs to the pools. There are safety ropes to keep visitors at a safe distance and occasional signs reminding of the danger of the very hot water: 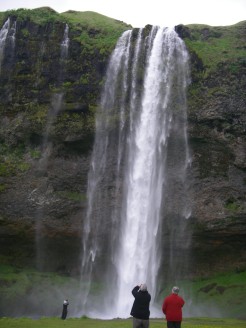 From there we drove to Seljalandsfoss, one of the landmarks easy to spot while driving the coastal highway. It is a tall waterfall (foss means waterfall in Icelandic) that is visible for miles as it plummets about 200 feet off the coastal ridge. This one’s secret attraction is the opportunity to walk behind the falling water in a shallow overhang. The bad news is that every tour bus on this section of Highway 1 has an obligatory stop here. The parking lot is large but the trail is narrow and there is usually a line for the restrooms. 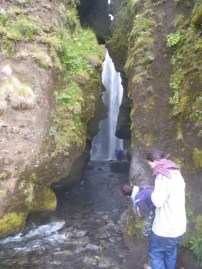 waterfall and return. Independent travelers can continue on the trail another half mile and view two hidden waterfalls in slot canyons. At that point in the summer, ladders necessary to view the first one easily and safely were missing. Bragi and I climbed high enough to get a glimpse of the falling water, but I don’t consider it worth the effort. The second falls were as I remembered— a surprising sight visible through a very narrow gorge. I had forgotten the watery access and wasn’t wearing waterproof boots, so I resisted entering the cavern for a closer view.

From there we headed to the village of Hvolsvöllur and our first lodging on the road, Guesthouse Kristján’s. I booked it through AirBnB.com, but the only room listed on that website has a double bed. The guest house offers several inexpensive rooms that share the basement kitchen, bath and laundry room. Until this trip I had understood an Icelandic double to mean two twin beds pushed together. It is clear that entrepreneurial Icelanders have figured out that a small room can be rented as lodging for two with a double bed when two twins won’t fit. Susan and I managed, but were not enthusiastic about the accommodations. Lesson learned. I will be more careful in the future.

The guesthouse is a two block walk from the ring road, where we found a nice café for dinner, the Eldstó Art Café/Bistro. It features a pottery gallery in the back rooms and should be a nice quiet local coffee shop in the off season. During the summer the place was hopping with tourists and a staff of college age young people who were very friendly, but seemed to have trouble figuring out which table was waiting for the order in their hands. My notes say I had a burger and a Tuborg light, but I just remember a good meal in interesting surroundings our first day on the road.