During the second week of January the authors of a new book on the 18th century Laki eruption, Iceland’s most devastating volcanic catastrophe, made two presentations in Seattle. One was at Seattle’s largest independent bookstore, Elliot Bay Book Company, and the other a slideshow talk at Town Hall.
One of the authors, Alexandra Witze, is an award winning writer for Nature magazine. Her talk at Town Hall was sponsored by Microsoft and the University Bookstore. A small admission was charged and the auditorium was full.

I bought but have not yet read 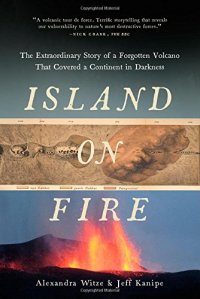 Island on Fire, so my comments are based on my first impressions of the book and on the presentation. The theme is understanding the magnitude of the eruption and its global impact, followed by discussion of the potential impact of a similar volcanic disaster in the future.

The title was probably chosen for the dramatic image it suggests. The picture it paints, however, goes far beyond what eyewitnesses saw. Laki did produce extremely high flames and more lava (15 km³) than any non-Icelandic eruption in historic times. The flames and lava were, however, limited to a 27 km/16 mi long fissure on an island the size of the state of Ohio. The explosive eruption’s flames are estimated to have gone 800-1400 meters/2600-4,600 feet into the air. But they were only visible from the nearest coastal village, Kirkjubærklaustur, not to the whole island.  There was a poisonous haze that affected much of the island, but it was not on fire. 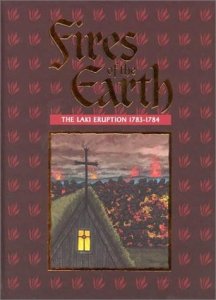 I know only one other book on the Laki eruptions that has been published in English. That is the 1990 translation of an eyewitness’ journal of the Laki events. In English that book´s title is Fires of the Earth: the Laki eruption, 1783-1784. That too may have provided an inspiration for the new title.

Another minor irritation I felt was the authors’ shortening the name of the historic village, Kirkjubærklaustur to Klaustur in the text. I remember when pronouncing that name was a challenge for me. But once you take it apart and recognize its meaning, the word becomes quite manageable. Kirk-yu-byre-kloi-ster: church-farm-cloister, pretty straight forward, right?

On the book’s acknowledgements page they thank someone at the Icelandair Klaustur Hotel for his help. Did the hotel’s commercial simplification of the name make the authors think the village wouldn’t mind ignoring their historic roots? That’s not likely in Iceland! The author demonstrated in her oral presentation that she can pronounce Eyjafjallajökull (ey-ja-fyat-luh-yo-kutl), so why not give Kirkjubærklaustur the same respect?

In the Q & A session after the talk at Town Hall I got to ask the final question — about the process of getting their book published. I had noticed that the book was published in Great Britain a year before the US: Why was that?
I did not write down the response immediately, but as I remember it went something like this: In the US, Iceland is just a small country with a small population, so publishers didn’t think the book would have much of a market. In Britain, Icelandic volcanoes show up on the national hazard list — well below terrorists — but on the same list. So their publisher knew there would be interest in that country for a book that discussed the risk of future eruptions in Iceland. After the book was established there it has been brought  to  the US book market.

Once again, check it out for yourself: Alexandra Witze and Jeff Kanipe. Island on Fire. Pegasus Books, 2015.

Mission: A publishing enterprise is more than a simple conduit between author and audience. We believe there is power in a physical book, and we seek to embrace the traditional spirit of print while still experimenting with the novelty of the future. We wholeheartedly subscribe to the notion that reading is not only sexy, it is also essential. At Resurrection House, we consider it a privilege to keep important things alive.
Resurrection House is a recently revived Northwest publisher of literary fantasy, sci-fi and their close relatives. The publisher (the human face of Resurrection House) is a favorite nephew of mine who is familiar with electronic publication as well as print. He is working to ensure the future of his preferred genre on the printed page. He knows there are challenges, but also rewards for producing the physical book.
When I was in Reykjavik recently, I asked two people at Iceland Review (published both in print and on the internet) what they think of the future of English book publishing. Their opinions are relevant as Iceland is the world’s most literate country with both the highest literacy rate and the most books read per capita.
If these writers are representative of the Icelandic publishing industry, they are not as optimistic as Resurrection House. The Icelandic writers point out the impact of the Smart Phone revolution. Iceland got its first radio station in 1930 they said, and as recently as 20 years ago had two only stations. Now Icelanders can receive 25,000 radio stations from all over the world via their phones – just one source of instant information and entertainment accessible via handheld electronic devices. They reminded me that there used to be 50,000 journalists in the United States just a few years ago. The number is now 35,000, with the number of newspapers shrinking and both publications and readers turning to electronic media.
They did say that ‘a good book (presumably meaning a well written product) will always be on paper’. Iceland Review editor and lead photographer, Páll Stefánsson, asserted that photography and art books will continue to find publication on paper, too. They both recommended electronic publication for less well-known authors, while seeking their audiences.
What do I think? When I look around, many more readers are holding books than Nooks or Kindles. Smart Phones are great for finding an instant answer, listening to tunes and playing small screen games – sometimes even for communicating with another human being. The publication of physical books may not be keeping pace with the growth of human population, but it is far from dead. At least I hope so. My book is mostly written and I know there are people out there waiting to turn its pages.