This was intended to be a recovery day after a big hike. But yesterday’s full day hike had turned into a moderate afternoon hike, so we had lots of energy for exploring the area near the Ljosafoss Skóli Hostel. Susan and I had noticed a nearby lake on our map that appeared to have a shoreline trail. Bragi remembered a gravel road that led to the trail, so off we went—with his warning that it might a buggy hike beside the water.

We parked at the top of a steep hill, and headed down to Ulfljótsvatn. Despite the homes sitting beside the road approaching the pretty blue lake, there were no boats on the surface or walkers on the shoreline. Once we reached level ground, all the houses were out of sight and we had the place to ourselves.

The trails became less developed the farther we went. It seemed they were used mostly by sheep and occasional birdwatchers. We saw swans on the water, heard and finally spotted a pair of loons. Among the grasses we observed pipits and wagtails, too. Occasionally we walked through a cloud of midges, but the bugs were cooperatively stationary, so they did not bother us much at all.

After cautiously crossing a marshy area and climbing over a small grassy hill, we were surprised to find some low stone walls and an archway, remains of a small building abandoned in the pastoral scenery above the lake. After snapping some photos and ascending one more hill, we wandered back through the tall grasses and returned up the road to the car.

Walking through the unknown countryside somehow made me think of the very first hike I had taken in Iceland, way back in 2007. The tour I was with had stayed in a grim workers´ hostel (small dark rooms and bathrooms, narrow halls, no fresh vegetables; I can’t remember how else it offended us) and hiked from its door into a geothermal wonderland. The lodging was close to the Nesjavellir Geothermal Powerplant, and it was surrounded by well-marked trails showing off the hot streams and colorful sulfurous soil that are features of the geologically-active area.

Before starting the hike, we visited a new hotel that has opened close to the site of the old hostel. The Hotel Ion is intended for international visitors who fly in for exclusive tours of Iceland’s highlights. I was a little surprised at the courtesy with which they welcomed three almost random hikers, but happy to take a coffee break in such elegant surroundings. 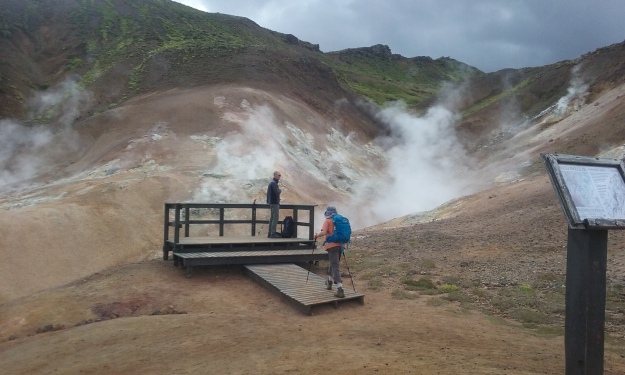 We drove a short distance to leave our car beside an adventure park that features a complex climbing structure with physical challenges for agile children and adults. We had a different adventure in mind. For the next couple hours we hiked past steamy streams, bore hole enclosures, neon green moss, carefully crossed narrow rocky creeks, and took in the views from wooden streamside platforms. After we had seen the highlights, Bragi returned for the car while Susan and I continued to a hilltop viewpoint beside a roadway. Our route didn’t always follow the developed trails, so we surprised pairs of grazing sheep more than once.

From there we drove to nearby Thingvellir (Þingvellir in Icelandic), a UNESCO World Heritage Site, as well as Icelandic National Park, both designations in recognition of its being the site of the world’s first parliament (Thing or Þing in Icelandic). About sixty years after the Vikings first settled in Iceland, the clans acknowledged they needed to get together to discuss and agree to laws they could live by. The clan representatives were appointed, not elected, and they were not able to record their decisions on paper, but these do not diminish their achievement. The representatives gathered from all over Iceland each summer, starting in 930. They camped under high cliffs that helped project the sound of speakers’ voices. They sat in council with their advisors and adopted laws, settled disputes and passed judgment on evil-doers.

We were lucky to visit Thingvellir late in the afternoon after the biggest crowds had gone. It was a fine ending to our patchwork day that was far more enjoyable than anticipated.