Stykkishólmur is one of my favorite places in Iceland. It is a small town perched at the end of a peninsula that protrudes into Breiðafjörður, the ‘broad fjord.’ The town of about 2000 is composed of small homes with colorful roofs and a few hotels and museums clustered around a small harbor that is protected by a high rock outcropping. The older wooden buildings reflect its history as a Danish trading port, starting in the 16th century. In contrast, an elegant modern church sits on a hill above the town, with the sea clearly visible to the east and north. The broad fjord appears as a large bay, intriguingly splattered with islands of all sizes and shapes. A few islands support summer homes and one, Flatey, has a small permanent community.
On my recent visit to the area I learned that many of the smaller islands are inhabited by sheep, in addition to seabirds. According to a tour boat deckhand, the ewes are left on the islands permanently. In late May we saw ewes and new lambs on several small grassy islets near the town. The young man also shared with us the tale of a ram that swam from island to island, playing havoc with the farmers´ plans to manage the lamb birthing schedule. The farmers generally move rams from island to island and thus control when lambs are born by transporting rams to the ewes at the humans’ convenience. The unscheduled pregnancies meant the farmers were less likely to know when to help the ewes birthing their lambs, but the ewes didn´t seem to mind.
An unexpected feature of a boat trip through the islands was a dish identified as ‛Viking Sushi’ in the tour´s brochure. This turned out to be raw scallops, scooped from the sea while we cruised and promptly offered to passengers on the half-shell. Scallops eaten this way are a bit saltier than the cooked variation, but surprisingly similar to the taste, texture and appearance of freshly cooked scallops that have been obtained from a seafood store. I would offer my apologies to the squeamish, or anyone offended by this haphazard harvesting of sea life for the entertainment of random tourists, but scallops are one of my favorite seafoods, and these were surprisingly and truly delicious in this very fresh form. 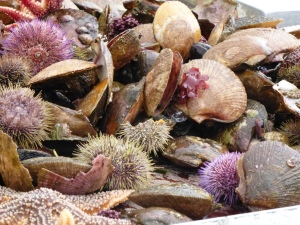 Casual bounty from the sea