As much as I want to finish this book about Iceland’s volcanoes, I cannot let the glorious summer we are having in the Pacific Northwest go by uncelebrated!

I have just spent three days camped at Kayostla Beach on the wild Pacific coast in Olympic National Park. This beach can be reached only by hiking – long beach hikes from north or south, paddle and hike via Lake Ozette, or drive circuitous back roads from Forks and take a short hike to the beach.

When we emerged from the forest trail we were in a small campground just above a broad sandy beach with lots of beach logs washed up against the edge of the forest. Walking north on the beach a short distance we found another little campground with a broad spool table, logs and a bench arranged around a fire pit. This kitchen design decided our home for the stay! On the beach side of the camp was a tall dead tree with a three-foot-long pink buoy tied to a high branch. It marked our camp whenever we wandered the beaches while we were there.

Taking time for packing, driving and hiking, we arrived at our camp in mid-afternoon. The rest of the day was spent setting up tents and exploring the neighborhood – especially all the empty campsites in our stretch of the beach. In addition to great furniture for six and a pink buoy, our camp had a convenient source of fresh water in a stream flowing a hundred yards to the south.

Day Two was committed to hiking north, in hopes of finding the site of a World War II aircraft lookout cabin above the beach at Eagle Point. The “beach” between Kayostla and the Cape Alava trails to the north is considered the roughest hiking on the entire Olympic coast. I haven’t hiked it all, but this section was distinctly challenging. From sand we went to cobblestones, larger stepping stones, then boulders. The pattern seemed to repeat, with rocks coated with slippery vegetation intermixed to test our balance.

At the foot of Eagle Head we searched for a trail. Seventy years having passed since the lookout cabin was occupied in the 1940s, so we had little hope of finding one. Two of us fought our way to the top of the 200 foot bluff – sometimes pulling up on green belay and sometimes crawling on steep rabbit trails. Most of the growth on our route seemed to be salal, although I remember trusting my weight to sturdy sword ferns as well. We appreciated finding few prickly blackberries or roses on our ascent.

On top we found only one clearing – a rare area where no bushes grew, just grasses and tender plants. We found no cabin, but without maintenance, none was expected after so many decades of the harsh Olympic weather. After catching our breath, we took a few photos to record our visit to the site.

We descended the bluff quickly, once we found the trail that had closed behind us. Our companions on the beach started calling when they spotted our motion in the shrubbery. When they were assured that we were headed down, most started hiking south. The tide was rising and we all needed to get around the next point to Kayostla Beach before the water came crashing on those slippery rocks. My friends and I passed the critical headland with minutes to spare and wandered the beach toward camp with an eye out for beach treasures as we ambled along.

The next day we headed south – thinking we were leaving rock hopping and boulder clambering behind. This was our sunshine day, designed for strolling sandy beaches, contemplating the offshore seastacks and the headlands to climb over. Just north of Starbuck Creek is a headland which once supported another lookout cabin built for the aircraft watchers of the early 1940s. But the building disappeared when the section of the cliff where it stood collapsed sometime during the intervening years. 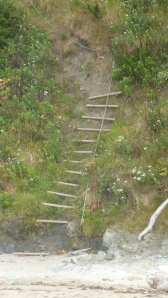 Headlands throughout this area rise steeply to 200 feet above the beach. The trails are often foot holes in the bank with a sturdy but loose-hanging rope fastened somewhere above, to hold onto while ascending. This trail had a wooden ladder held together with ½” steel cable – and a rope for added security.

Four of us ascended the Starbuck headland and then found a traversing trail going out to the point of the ridge. High above the beach – and clinging to a sturdy tree on the narrow summit – we peered out as the aircraft lookout must have done so long ago. Now we saw sturdy backpackers and even families hiking on the beach. Then the two men and a dog assigned to each station had lonely duty and only radio contact with a dispatcher back at Lake Ozette.

At the headland above Cedar Creek we again found round markers high on the bank, telling with their yellow and black quartering that the point held danger at high tide and a route over the headland was available. These steep trails were carved out long ago and do not get much maintenance. One we saw seemed to be a steep clay bank with only a rope – no footholds. Most of us appreciated the low tide when we approached that point, and worked our way around on the rocks at the foot of the bluff to avoid the cliff climb. The approach from the other side was a pleasant gradual ascent on a woodsy trail – after the first ten feet above the beach had been maneuvered. It is hard to remember on a warm sunny day that winter storms thrash the feet of these bluffs. Logs beat against the bank and reshape anything we might like to think of as a trailhead.

The reward at the top of this headland was the remains of a cabin which stood against the weather until 2007. Its relatively easy access had made it a favorite for beach hikers and it had gotten periodic repairs that held it together until fairly recently. According to Olympic National Park information on the internet, this cabin was known as “Coastie,” suggesting that it was part of the Coast Guard’s aircraft watch program in 1941 and ‘42.

After a day of climbing two headlands and walking the beach admiring plants, rocks, shells and glass beach gems, we returned to our camp under the big pink buoy. Our explorations were complete for this visit and the fog bank was returning. Summer was not yet over, but it would probably be the last time this year that most of us would visit this well favored location. 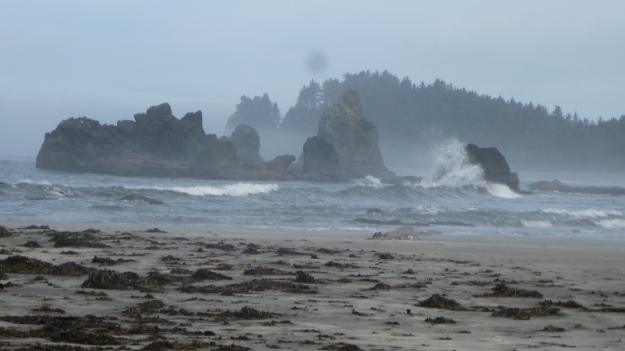